UP, UP AND AWAY!
Getting Ready for Parachute Play

UP, UP AND AWAY!
Getting Set for Parachute Play

BE A HERO OR BE A HEADLINE

Getting Set for Parachute Play 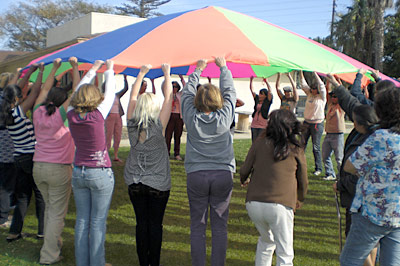 The kids are holding onto the parachute using the overhand grip (palms down, fingers grasping the edge) eagerly waiting for instructions-from YOU-the leader of the parachute activities! I always like to tell the children to think of me as the quarterback of a football team, like Joe Montana or Steve Young, calling out the commands for the next play. I reinforce that there is only one quarterback on the team, thus only one leader directing the activities. Children who have had previous experiences with the parachute will have favorite games that they want to play. Perhaps they are already shaking the parachute, jumping up and down or running under the parachute-full of energy, enthusiasm and nonstop giggles and wiggles. Insure them that there will be a time for them to lead their game but first the group needs to establish rules for playing safely and cooperatively with the parachute. Solicit ideas and suggestions from the children themselves. They will more likely have a sense of ownership and even "buy into" accepting and reinforcing the rules if they have had a part in creating them. I'm sure your discussions will take the following direction:

Are we having fun yet? You bet! You got READY when you found or bought a parachute! Your class is all SET - doing movin' and shakin' warm ups! And now the children are eager to GO...and play more games and activities with the parachute! Watch for my next featured article on UP, UP AND AWAY - Getting Ready for Parachute Play.

Relevant Workshop
UP, UP & AWAY! PARACHUTE PLAY