ROLL WITH THE DICE

HI! MY NAME IS JOE 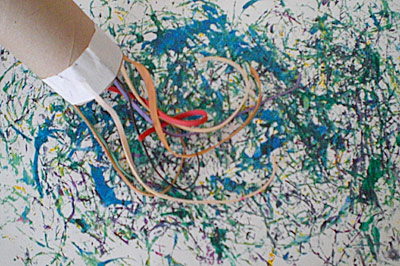 Procedure:
1. Cut tape an inch longer than the rim of the roll and place sticky side up on the table.
2. Cut rubber bands once to make long strings.
3. Place one end of the rubber band along the tape to create the bristles of the brush.
4. Repeat leaving finger's width of space between each rubber band.
5. Once all rubber bands are in place stick piece of tape along the bottom rim of the roll, forming a paintbrush or Squiggly Brush
6. Drizzle BioColor® Paint onto piece of paper.
7. Shake and bounce Squiggly Brush in paint.
8. Watch as an abstract "Pollock-esque" piece of art appears.

He began to study painting in 1929 at the Art Students' League, New York, under the Regionalist painter Thomas Hart Benton. During the 1930s he worked in the manner of the Regionalists, being influenced also by the Mexican muralist painters (Orozco, Rivera, Siqueiros) and by certain aspects of Surrealism.

From 1938 to 1942 he worked for the Federal Art Project. By the mid 1940s he was painting in a completely abstract manner, and the `drip and splash' style for which he is best known emerged with some abruptness in 1947. Instead of using the traditional easel he affixed his canvas to the floor or the wall and poured and dripped his paint from a can; instead of using brushes he manipulated it with `sticks, trowels or knives' (to use his own words), sometimes obtaining a heavy impasto by an admixture of `sand, broken glass or other foreign matter'. This manner of Action painting had in common with Surrealist theories of automatism that it was supposed by artists and critics alike to result in a direct expression or revelation of the unconscious moods of the artist.

Pollock's name is also associated with the introduction of the All-over style of painting which avoids any points of emphasis or identifiable parts within the whole canvas and therefore abandons the traditional idea of composition in terms of relations among parts. The design of his painting had no relation to the shape or size of the canvas -- indeed in the finished work the canvas was sometimes docked or trimmed to suit the image. All these characteristics were important for the new American painting which matured in the late 1940s and early 1950s.

During the 1950s Pollock continued to produce figurative or quasi-figurative black and white works and delicately modulated paintings in rich impasto as well as the paintings in the new all-over style. He was strongly supported by advanced critics, but was also subject to much abuse and sarcasm as the leader of a still little comprehended style; in 1956 Time magazine called him `Jack the Dripper'.

By the 1960s, however, he was generally recognized as the most important figure in the most important movement of this century in American painting, but a movement from which artists were already in reaction (Post-Painterly Abstraction). His unhappy personal life (he was an alcoholic) and his premature death in a car crash contributed to his legendary status. In 1944 Pollock married Lee Krasner (1911-84), who was an Abstract Expressionist painter of some distinction, although it was only after her husband's death that she received serious critical recognition.

It was Jackson Pollock who blazed an astonishing trail for other Abstract Expressionist painters to follow. De Kooning said, "He broke the ice", an enigmatic phrase suggesting that Pollock showed what art could become with his 1947 drip paintings. It has been suggested that Pollock was influenced by Native American sand paintings, made by trickling thin lines of colored sand onto a horizontal surface. It was not until 1947 that Pollock began his "action" paintings, influenced by Surrealist ideas of "psychic automatism" (direct expression of the unconscious). Pollock would fix his canvas to the floor and drip paint from a can using a variety of objects to manipulate the paint.